Chat with us, powered by LiveChat What Heroin Looks, Tastes, and Smells Like - Rehab Recovery Centers

What Does Heroin Look, Taste, and Smell Like? by Rehab Recovery Centers

Home » Rehab Recovery Centers Blog » What Does Heroin Look, Taste, and Smell Like? 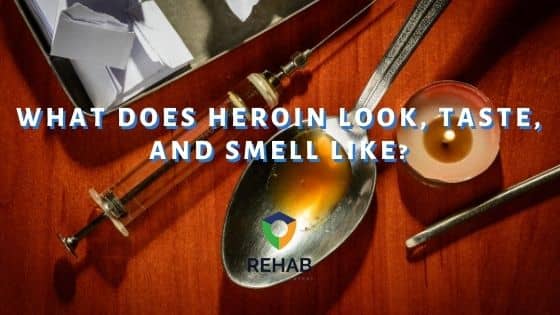 Heroin is an extremely addictive opioid drug that poses a great risk of overdose and lasting health effects. According to the National Institute on Drug Abuse, “In 2016, about 626,000 in the U.S. had a heroin use disorder.”[1]

The National Institute on Drug Abuse also reported that 15,469 individuals died from a heroin overdose in 2016.[2] This means that close to 3% of individuals abusing heroin in 2016 died as a direct result of the drug.

Many different forms of heroin can be found on the street. The most common form of heroin looks like a fine powder.

The color of powdered heroin varies, with shades of white, pink, and brown all being associated with powdered heroin. Most people seek out lighter shades of heroin, claiming that the lighter color indicates that the heroin is pure. However, brown and pink powdered heroin can also be extremely potent.

Black tar heroin looks like a tacky paste or a lump of coal. This form of heroin has the lowest potency and the most chemical additives. In other words, black tar heroin is not pure and many individuals have no idea what additional substances they are ingesting.

Because black tar heroin is soluble, people may melt it down into a liquid. The liquid form of heroin is usually brown in color. People who use liquid heroin either inject it with a needle or inhale it by a method known as “foil smoking.”

How Does Heroin Taste?

Heroin typically has a chemical taste, often being described as bitter. However, the taste of heroin often differs due to the various chemical additives manufacturers and dealers cut the drug with.

As a result, heroin may taste bitter, sweet, or acidic.

When heroin is totally pure, it has no smell. However, almost all heroin being sold on the street is cut with at least one additional chemical. Most of the time, heroin smells sharp and acidic, almost like vinegar.

The lowest grade heroin (least potent) will have the most pungent smell. This occurs when heroin has been through a lot of chemical processing, diluting, and cutting. For example, this is common among black tar heroin.

Powdered heroin that has been diluted heavily may smell like cat urine, cat litter, or random household chemicals.

How to Spot Fentanyl-Laced Heroin

Most heroin has been cut with additional chemicals. Drug dealers do this because it stretches out their products, making them more money overall. However, this is extremely dangerous to their customers.

Individuals abusing heroin will, nine times out of ten, have no idea what chemicals have been added to their heroin because all batches look very similar. Unfortunately, many people have begun cutting heroin with fentanyl, an extremely dangerous drug that often results in fatal overdoses.

According to studies, fentanyl-related deaths have risen 540% over three years.[3] Because heroin is often laced with fentanyl, it is important to know how to spot it.

Unfortunately, fentanyl is odorless, tasteless, and not easily detected by the eye. Because of this, the only way to prevent an accidental fentanyl overdose is by using fentanyl testing strips.

To use them, individuals must dilute a small amount of their heroin in water. Then, they will dip their testing strip in the solution for 15 seconds. This will allow them to view the results on the test strip to determine whether fentanyl is present in their heroin.

Signs of a Heroin or Fentanyl Overdose

Individuals who are addicted to heroin are at extreme risk of experiencing an overdose. If their heroin is laced with fentanyl, their risk of overdose increases by tenfold. Because of this, it is important to be aware of the signs of a heroin or fentanyl overdose.

Heroin and fentanyl overdoses share similar signs because they are both opioids. The only difference is that heroin is less potent than fentanyl. The signs of a heroin/fentanyl overdose include:

If someone is experiencing a heroin or fentanyl overdose, emergency medical services must be contacted immediately. Additionally, naloxone is an opioid overdose reversal drug that can prevent an individual from dying as a result of an overdose. This should be used immediately if the individual has access to naloxone.

If you or a loved one suffer from heroin addiction, professional treatment is a must. Heroin addiction can quickly lead to fatal overdoses or other life-threatening medical conditions. Because of this, early intervention is key.

At Rehab Recovery Centers, we can help you or your loved one find a heroin rehab program suited to your individual needs. Contact us today for more information on how to find help for heroin addiction.