What is Fetal Alcohol Syndrome (FAS)? by Rehab Recovery Centers 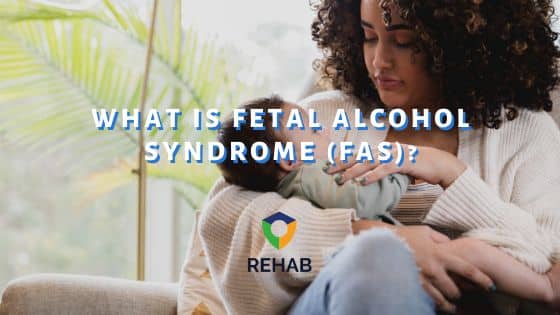 When a developing baby is exposed to alcohol before birth they can be affected in many ways. Depending on how much alcohol they were exposed to, they can experience mild to severe symptoms. Fetal alcohol spectrum disorders are a scale of conditions that range from mild to severe effects, with fetal alcohol syndrome being the most severe.

Other conditions that fall under the FASDs scale include:

Fetal alcohol syndrome is a lifelong disorder that is not curable. This means that the physical defects and mental deficiencies usually persist for a person’s lifetime.

While this condition can be prevented by avoiding alcohol during pregnancy, the CDC reports that 0.2 to 1.5 infants for every 1,000 live births have FAS.[1] Approximately 1 in 10 pregnant women report drinking during their pregnancy.

Fetal alcohol syndrome is caused by a pregnant woman drinking any type of alcohol during their pregnancy. This includes hard liquor, beer, wine, and hard ciders. FAS cannot develop unless a woman drinks alcohol while they are pregnant.

The main reason that alcohol abuse is dangerous during pregnancy is because of how the alcohol passes through the system. When a pregnant person drinks alcohol, the substance is passed through their bloodstream and into the umbilical cord. Fetuses cannot metabolize alcohol like an adult, causing it to stay in their body for a long amount of time.

Alcohol interferes with the normal development of the fetus in many ways, including harming the central nervous system and the brain as a whole. For instance:

What are the Symptoms of FAS?

Fetal alcohol syndrome causes symptoms like mental and physical defects. This can include facial deformities, limb defects, delays in bodily development, and mental or emotional challenges that can significantly impact the person’s ability to function in their daily lives throughout childhood and adulthood.

The physical defects caused by FAS may include:

FAS may cause neurological issues such as:

While fetal alcohol syndrome affects infants and fetuses, it continues to affect a person throughout their life. Some of the symptoms may develop later on, while others begin at birth.

There is no specific lab test that can confirm whether a child has fetal alcohol syndrome. Additionally, diagnosing this condition may be difficult as the mother may not disclose their drinking habits during the pregnancy. The symptoms of this condition can mimic other disorders so people may be wrongly diagnosed with autism spectrum disorder (ASD), attention deficit hyperactivity disorder (ADHD), or Williams syndrome.

To diagnose this condition doctors look for the following traits:

Doctors will ask the mother about her drinking history during the pregnancy. While only one drink can lead to FAS, the more a mother drinks, the more likely their child will develop this syndrome. However, as mentioned, mothers may be reluctant to disclose their previous drinking habits – complicating the diagnosis process.

How is FAS Treated?

Fetal alcohol syndrome is not curable but many of the symptoms are manageable. Certain features can improve a child’s development and outlook regarding FAS, including:

Early treatment of this condition can significantly improve some symptoms and lessen the developmental issues that the child experiences.

Treatment options for FAS include:

According to research, between 50 to 90% of people with FASDs meet the criteria for ADHD.[3] This means that undergoing treatment for ADHD may significantly improve a person’s ability to function in their daily life.

Finding Help for Alcohol Abuse and Alcoholism During Pregnancy

If you or someone you know suffers from alcoholism and is currently pregnant, it’s time to seek help. Drinking alcohol during pregnancy can lead to the development of a fetal alcohol spectrum disorder like fetal alcohol syndrome. The only way to prevent this from occurring is to stop drinking alcohol.

Our team at Rehab Recovery Centers can connect you with a local alcohol rehab center that will teach you how to live a life free of alcohol. Contact us today to get started.