What is Freebasing and Why is it Dangerous? by Rehab Recovery Centers

Home » Rehab Recovery Centers Blog » What is Freebasing and Why is it Dangerous? 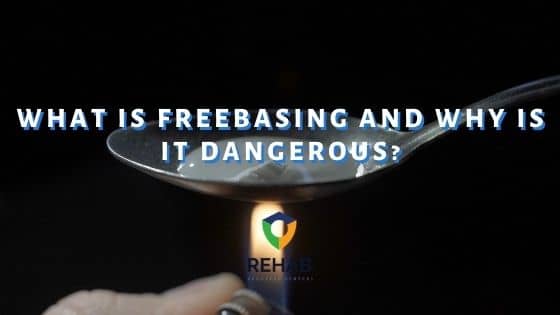 Cocaine is a highly addictive stimulant drug that causes euphoria and a rush of energy. While these effects cause individuals to become addicted to the drug quickly, they do not last very long. This causes people to take large amounts of cocaine in short periods.

Because cocaine has become a party drug, people have begun to believe the misconception that it is not dangerous. Unfortunately, this substance is hazardous and can cause individuals to become addicted, overdose, or deal with long-term health consequences.

While cocaine is usually snorted, there are other ways to consume the substance. One of the most dangerous ways to use cocaine is referred to as “freebasing”.

Freebasing cocaine is characterized by converting the powder into something that remains stable when it is exposed to heat. Then, a glass pipe is heated and used to inhale the vapors of cocaine.

Freebasing was created in the 1970s. Cocaine is made from hydrochloride and alkaloid, which is a base. Individuals would use ether to “free” the base from any additives and impurities found in traditional coke.[1]

Because freebase cocaine has a higher lipid solubility, it enters the brain much faster than typical ways of using the substance. Many people have reported that freebasing cocaine causes a high similar to or more potent than injecting the drug. This form of cocaine is more potent, causing it to be more addictive and lead to more devastating health effects in the short and long term.

The Effects of Freebasing

Freebase cocaine is absorbed through the membranes of the lungs, allowing it to enter the brain and bloodstream within 10 to 15 minutes. This causes an immediate and intense high that lasts about 30 minutes. Once the euphoric effects of freebase begin to dissipate, users are left feeling fatigued, depressed, anxious, and paranoid.

The effects of freebase cocaine include:

Freebasing cocaine can also lead to a variety of health effects, including addiction and fatal overdoses. Because of this, individuals struggling with cocaine addiction should attend a professional treatment program as soon as possible.

How is Freebasing Cocaine Different from Smoking Crack?

Freebasing is pretty much obsolete today, as many people have realized the dangers of taking a blowtorch to a highly flammable liquid. When people started to catch on to the explosive nature of this process, crack cocaine was created.

Crack cocaine is made by using baking soda to remove hydrochloride from cocaine. This creates a crystalline type of rock that individuals smoke in a pipe.

The only difference between freebasing and smoking crack is the way the substances are made. Additionally, making crack has a lower risk of explosion than freebasing cocaine. However, they create the same effects and intensify the potency of the drug.

The Risks of Freebasing

The rapid and intense yet short-lived high of freebase cocaine often leads to an intense crash. The crash associated with freebasing is often worse than that of individuals who snort cocaine. These “crashes” can include symptoms such as intense anxiety, fatigue, irritability, paranoia, and extreme depression.

Additional adverse effects of freebasing include:

Other risks of freebasing cocaine include:

Using cocaine in any way comes with the risk of developing an addiction to the substance. Because the drug is extremely potent and only lasts a short time, individuals begin binging the substance to avoid experiencing a crash. Eventually, they become dependent on cocaine.

Once they become dependent, they will experience more than just a crash if they stop using the drug. Withdrawal symptoms will begin to occur, making the individual continue their binge cycle even further. This can lead to overdoses and additional long-term health effects of cocaine abuse.

According to the National Library of Medicine, freebasing cocaine can also lead to the development of psychosis.[2]

When someone is freebasing coke, it is common for them to take too much of the drug. This can lead to life-threatening overdoses. If an individual is overdosing on cocaine, they will require immediate medical attention.

The symptoms of a cocaine overdose include:[3]

If you or a loved one struggle with cocaine abuse and addiction, recovery is possible. Cocaine addiction is difficult to endure, especially if you are doing so on your own. Thankfully, addiction treatment centers can help you or your loved one recover from cocaine use disorder.

Contact Rehab Recovery Centers today to find a recovery center near you.