Is Alcohol Safer Than Other Drugs? by Rehab Recovery Centers 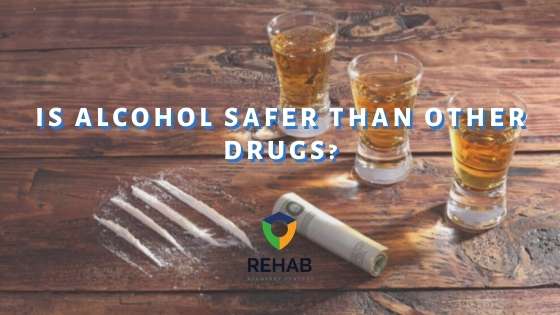 Opioids are taking the headlines by storm during the deadly opioid epidemic in the United States. While prescription pills are causing more death than we can prevent, alcohol is silently killing many Americans on a daily basis. This is because we do not hear about the dangers of alcohol often enough. Alcohol is the most socially acceptable drug, with it being sold in liquor stores, big department stores like Walmart, and even some gas stations. Even with the knowledge of alcohol being dangerous, the general public still believes that alcohol is safe to consume regularly. However, science has found that alcohol is one of the deadliest drugs.

Many people wonder if alcohol is safer than other drugs. While the news and media outlets may portray alcohol as a normal American pastime, alcohol is, in fact, among the deadliest of drugs in the market. To begin, let’s take a look at data from The Independent Scientific Committee on Drugs (ISCD).

The ISCD scores different substances based on how dangerous they are, with 100 being extremely harmful and 0 being considered not harmful. Of the 20 drugs they examined, alcohol scored with a high 72. To compare, heroin and crack-cocaine scored at 55 and 50 respectively.[1] Looking at these ratings, it’s easy to see that alcohol is considerably more dangerous than other drugs – despite popular belief.

To continue, approximately 63,000 people died as a result of drug abuse in 2016. On the other hand, nearly 88,000 people died due to chronic alcohol abuse in the same year.[2] These numbers are staggering and provide insight into the silent alcoholism epidemic of the United States. It’s also important to remember that alcohol abuse affects more than the individual user.

Chronic alcohol consumption is to blame for a large majority of preventable injury and death, including:

Unfortunately, alcohol abuse causes the body to slowly deteriorate, while many illicit substances cause instantaneous death by overdose. Even though alcohol is legal, the adverse effects are more far-reaching than those of illicit drugs. While alcohol is proven to be more harmful than other drugs in the long-run, not everyone who drinks is at risk of suffering from the effects of alcohol consumption. Alcohol consumption becomes dangerous once you begin to consume alcohol on a regular and frequent basis, and it is not safer than other drugs.

The excessive consumption of alcohol is harmful to both one’s physical and mental health. This is because alcohol is known to affect every one of an individual’s bodily systems. However, some factors play a part in the development of health effects stemming from chronic alcohol abuse. These factors include the amount a person drinks, their genetic factors, gender, and overall health.

Alcohol abuse has been linked to over 60 diseases, further proving that alcohol is not safer than other drugs. Some of the most common health effects of chronic alcohol consumption include:[3]

In addition to the listed adverse health effects of chronic heavy drinking, individuals are at risk of developing an alcohol use disorder (AUD), also commonly referred to as alcohol addiction or alcoholism. Alcohol use disorder is defined as a drinking pattern in which an individual has issues with controlling the amount of alcohol they consume, continuing to drink despite facing negative consequences, an increasing tolerance towards alcohol, and the presence of alcohol withdrawal symptoms when they stop drinking suddenly. Unfortunately, individuals who develop an AUD face a higher risk of developing the adverse health effects of chronic alcohol abuse.

The Dangers of Alcohol Withdrawal

If you are wondering if alcohol is safer than other drugs, the symptoms of alcohol withdrawal alone will answer your question. Alcohol withdrawal is a term used to describe a set of symptoms that individuals experience after drinking heavily regularly (or developing alcohol use disorder) and abruptly stopping their use of alcohol. Symptoms may appear as early as eight hours after the last drink and will continue for weeks as an individual’s body recovers from the effects of alcohol dependence.

The common symptoms of alcohol withdrawal include:

However, the severe and less common side-effects of alcohol withdrawal are what cause the most concern. Individuals who have been drinking heavily for an extended period of time may suffer a severe form of alcohol withdrawal known as delirium tremens (DTs). This serious, life-threatening condition involves sudden and severe changes to a person’s brain and central nervous system (CNS) and is considered a medical emergency.

Delirium tremens is characterized by symptoms that include:

Symptoms of delirium tremens may set in anywhere between 48 hours or 10 days after the last drink and typically worsen very quickly. Alcohol detox helps minimize an individual’s risk for developing delirium tremens and helps to treat the symptoms of alcohol withdrawal.