What are Poppers Drugs? by Rehab Recovery Centers 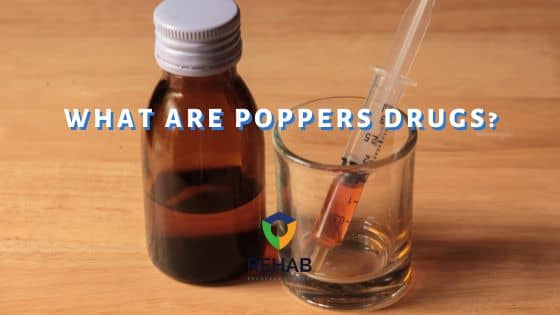 Poppers is a slang term for a psychoactive drug known as amyl nitrite, butyl nitrite, or liquid gold. People abuse these inhalant drugs because they can provide an instantaneous high that includes effects like dizziness, warm sensations, and an increased heart rate. However, these drugs are extremely dangerous.

These drugs are typically sold in small bottles at gas stations as room aromas or deodorizers, however, this is not what they are actually intended for. Like the drug K2, they are marketed as something innocent to prevent them from being taken off the shelves. When someone begins abusing poppers, they are at an increased risk of experiencing life-threatening effects and even an overdose.

People began abusing poppers in the 1960s when amyl nitrite was used as a heart medication. Amyl nitrite was referred to as “poppers” because they were provided as capsules that had to be cracked or popped to release the chemical.

Amyl nitrites are still used to treat pain associated with angina attacks. While this is only given rarely, it works by increasing the heart’s blood and oxygen supply. It is important to remember to never attempt to use the poppers sold in gas stations to treat heart problems, as this can lead to fatal consequences.

According to the FDA, these drugs are sold under the names:[1]

The Associate Commissioner for Regulatory Affairs made a statement about the dangers of poppers. She said, “These chemicals can be caustic and damage the skin or other tissues they come in contact with, cause difficulty breathing, extreme drops in blood pressure, decreases in blood oxygen levels, seizures, heart arrhythmia, coma, and death. Do not ingest or inhale under any circumstances.”[1]

What are the Effects of Nitrite Poppers?

Poppers cause an immediate rush of warm sensations and an intoxicating effect similar to that of alcohol. While the effects come on pretty quickly, they do not last very long. This may cause an individual to continuously use poppers, putting them at an increased risk of overdosing on amyl nitrite.

While some people find the psychoactive effects of poppers drugs pleasurable, others find it confusing, scary, and disorienting.

The side effects of amyl nitrate or poppers include:

The vasodilating effects cause blood vessels to dilate, leading to a rapid drop in blood pressure. This is what causes lightheadedness and warm sensations. So, right from the get-go, using this drug is extremely dangerous.

The Dangers of Using Poppers

While they are sold in stores, using poppers is extremely dangerous. They pose a risk of developing dependency and addiction, however, this is only the least of someone’s worries. Common dangers associated with amyl nitrite abuse include:

Poppers are highly flammable substances that are intended to be kept away from the skin. When the liquid comes in contact with someone’s skin, they could develop a chemical burn. Additionally, it is extremely common for people who abuse these drugs to have skin lesions on their mouth or nose depending on how they use the drug.

According to a study, some poppers brands can lead to significant eye damage that leads to disrupted vision.[2] The eye damage that individuals experience after inhaling the substance can be permanent. This is especially common with drugs that include isopropyl nitrite.

This is also true for blood pressure medications.

Poppers are known to lower people’s inhibitions. This means that they are more susceptible to suggestions and could end up doing things they wouldn’t normally do.

For example, this could cause someone to have sex without a condom, leading to the development of a sexually transmitted infection (STI). Additionally, these drugs limit pain sensations, meaning an individual may not be aware if they got a cut or tear during sex, exposing them to contracting an STI.

Individuals who swallow poppers and use a large amount of them are at risk of developing something known as methemoglobinemia. This is a life-threatening condition that occurs when someone’s blood cells contain too much methemoglobin. As a result, this makes it hard for the blood to carry oxygen throughout the body and severely impacts the organs.

Fatal “sudden sniffing death” syndrome has been reported as a result of popper abuse.[3] This is another word for an inhalant overdose. When someone uses too much amyl nitrite, they could experience a life-threatening abnormal heart rhythm that leads to their death.

Individuals who abuse poppers are at risk of developing a wide range of life-threatening effects and conditions. Because of this, if you or a loved one routinely abuse poppers, it’s time to seek professional help.

Contact Rehab Recovery Centers today to get connected with a top-rated drug and alcohol rehab center near you.