How Long Does DMT Stay in Your System? by Rehab Recovery Centers

Home » Rehab Recovery Centers Blog » How Long Does DMT Stay in Your System? DMT (N, N-dimethyltryptamine) is a potent hallucinogenic drug. This substance produces similar effects to that of LSD, but on a more intense level. DMT is a Schedule I drug, making it illegal to manufacture, possess, buy, and distribute.[1]

If you have heard of ayahuasca, DMT is the main active ingredient. While ayahuasca contains chemical compounds stemming from two plants, DMT comes directly from the Psychotria Viridis.

Additionally, DMT is a chemical that is already present in the human body in small amounts. When someone takes DMT, they increase the amount of this chemical in their body; causing psychedelic effects.

While DMT is not usually detectable on basic drug screening tests, some tests can detect it in your system for days or weeks.

How Long Does it Take to Feel the Effects of DMT?

DMT works by affecting certain neurotransmitters in the brain. The changes that DMT causes to serotonin levels and processing systems in the brain are what make you experience visual distortions and hallucinations.

Some of the common effects of DMT intoxication include: 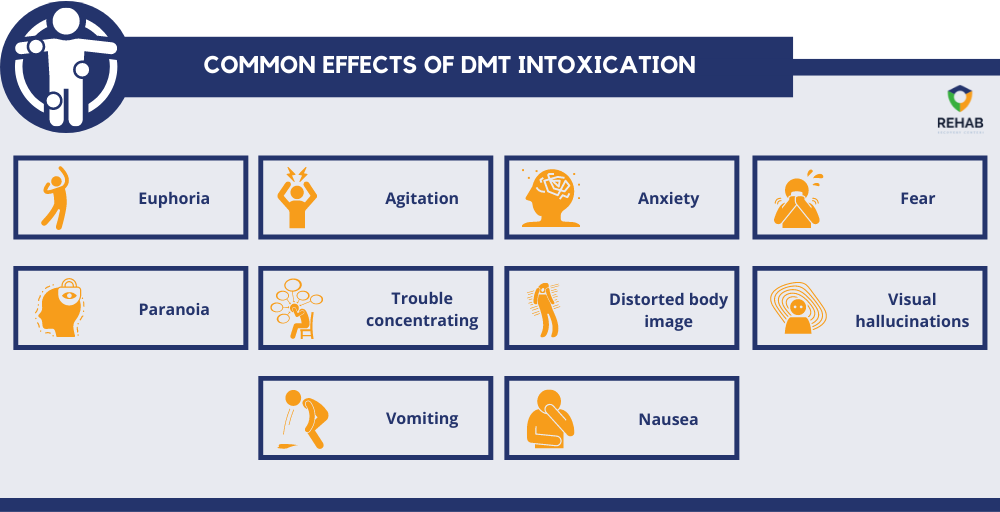 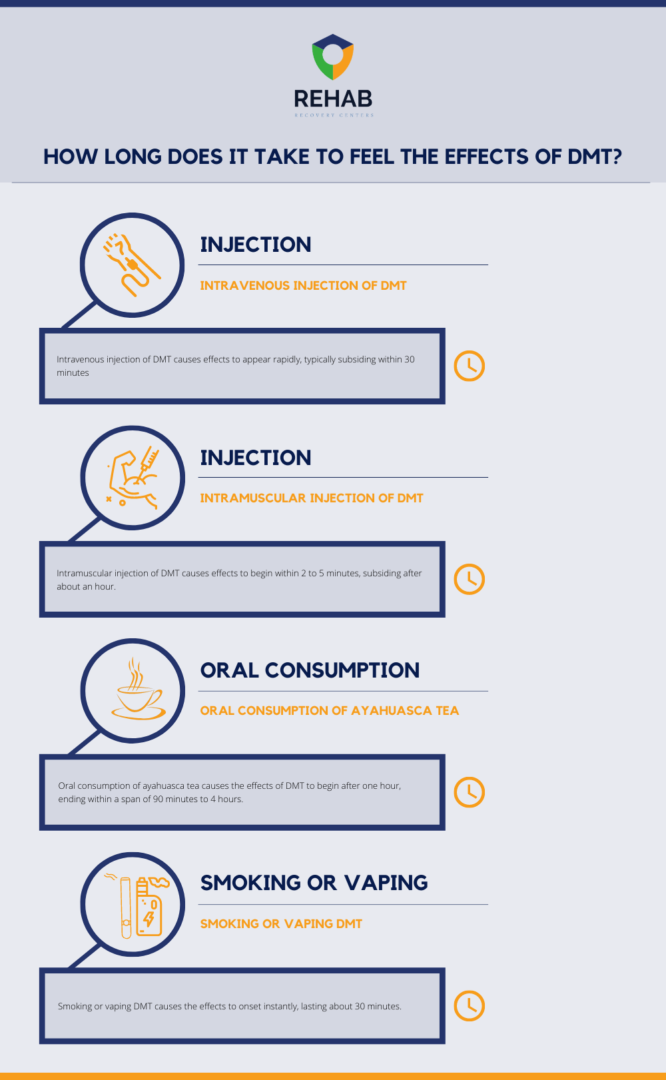 DMT produces effects very soon after you consume it. However, the method of use does play a part in how long it takes you to feel the effects. For example:

DMT is known to cause individuals to go into a dream-like state, producing intense open and closed-eye hallucinations. Because of the potency of these hallucinations, if you have mental health conditions like schizophrenia, taking DMT is extremely dangerous. In fact, some studies have linked DMT use to the onset of psychosis.[2]

How Long Does DMT Last in Your Body? 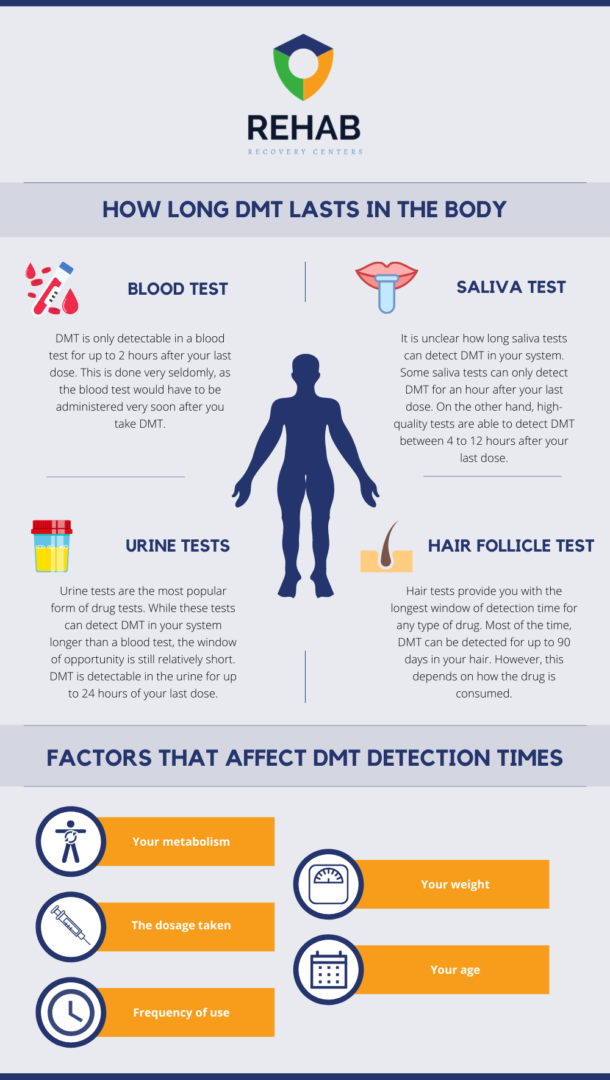 The exact half-life of DMT is hard to pinpoint, especially when you consider the various methods of use. When DMT is injected, the half-life is around 15-20 minutes. However, the half-life is considerably longer if you drink DMT.

If DMT is consumed orally by itself it will have no effect. This is why individuals use ayahuasca, which contains monoamine oxidase inhibitors (MAOIs). MAO is the chemical that prevents enzymes in your body from breaking DMT down and rendering it ineffective.

While DMT is not included in typical drug tests used by the police, there are tests specific to DMT that can be purchased. How long DMT is detectable in your system by a drug test depends on the type of test as well as a variety of personal factors.

DMT is only detectable in a blood test for up to 2 hours after your last dose. This is done very seldomly, as the blood test would have to be administered very soon after you take DMT.

Urine tests are the most popular form of drug tests. While these tests can detect DMT in your system longer than a blood test, the window of opportunity is still relatively short. DMT is detectable in the urine for up to 24 hours of your last dose.

Hair tests provide you with the longest window of detection time for any type of drug. Most of the time, DMT can be detected for up to 90 days in your hair. However, this depends on how the drug is consumed.

Personal health factors will affect how long DMT stays in your system. Just like everyone has a different metabolism for food, the same goes for drugs and alcohol.

Factors that affect how long DMT stays in your system include:

It is important to note that there are no home remedies to rid your body of DMT. If you are hoping to sweat DMT out of your system to pass a drug test, it will not work. The only way to get DMT out of your body is by waiting or attending a professional detox program.

Repeated DMT abuse can lead to an array of psychological issues. Additionally, individuals with pre-existing mental health conditions face extreme risks when they use DMT. Because DMT can lead to severe episodes of psychosis, people with a family history of mental illness should avoid this drug.

If you or a loved one frequently abuse DMT, it’s time to seek professional help. Rehab Recovery Centers can help you find a professional rehab program for addiction and any co-occurring mental health issues you may struggle with. Contact us today to speak with a dedicated admissions coordinator.